Book Review Essay: Writing the World We Want into Existence

:: The theme of this month’s book review essay is writing the world we want into existence, or, writing the white supremacist patriarchy out of it.* 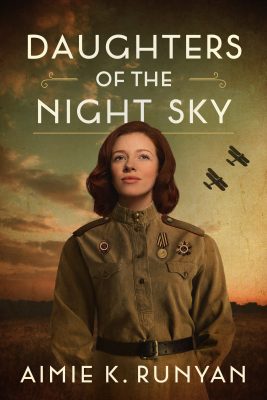 When I first saw the cover of Runyan‘s Daughters of the Night Sky, I thought, “Oh my God, the cover designer screwed up.” Because this is a World War II book about female pilots, and on the cover there were biplanes. In WWII, pilots flew really cool single-engine props like P-51 Mustangs—sleek, steel machines that looked like airborne torpedoes with wings. They didn’t fly planes made of fabric like they did in WWI. That’s ridiculous.

So, I was totally wrong. Daughters of the Night Sky tells the story of Katya, who dreams of being a pilot despite being a woman in early-20th-century Russia. She manages to earn a place in a military flight school. A WWII approaches, she joins an all-female regiment of nighttime bombers. The planes they’re given to fly are indeed old-fashioned biplanes—just like the ones on the book cover. These planes are so old, they don’t even have radio comms. They don’t have parachutes. They don’t have anything except for a woman pilot, a woman navigator, and some bombs.

But the women are so successful that they keep earning adulations, honors, and more dangerous duties. The Nazis give them a dazzling nickname: Die Nachthexen—The Night Witches. I want that on a t-shirt. (Aimie, can you please make that happen?)

This book is simply beautiful: the characters vivid, the historical setting immense, the story sweeping and magnetic. Runyan brings incredible characters from history to life and makes you care, deeply, about their future.

Does this sound familiar? Does this sound like the way things still are? It did to me. In Daughters, Runyan tells a universal story, one that we still live today, not necessarily in war zones (but I bet is still true in war zones).

The reality Runyan wrote into existence is this: The Daughters always stood by each other. They always believed in each other. When one began to doubt herself, to stumble, the others stood by her side and held her up until she found her footing again.

When you see it written down it becomes so obvious. That’s what we need to do. Even in a book about female Russian aviators during WWII, this is an obvious universal truth. We aren’t going to make it unless we carry each other along. 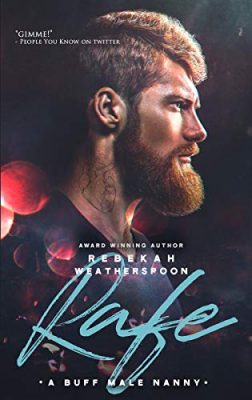 I just finished RAFE last night, and my husband kept fussing at me to be quiet. This book is laugh-out-loud funny. But it is so much more than that.

First of all, romance novels are the balm of my soul. A good romance novel does so many things: It shows how much better the world can be (see, supra, the theme of this column), it relieves my anxiety as well as any drug (I have generalized anxiety disorder, and this is not medical advice), and it shows how the struggle for human connection despite adversity can be both heart-wrenching and transcendent.

Let’s talk about me for a minute. I’m a working mom with two kids. I don’t have twins like Sloan in RAFE, but they’re 7 and 9, and soon they’re going to be 8 and 9 because apparently I can’t do birth control right. Point is, they feel like twins, and they run me ragged, and my husband (Sloan’s divorced, but I’m not) works in another city with a lot of late nights and traveling. So: What’s a working woman to do? I’ll tell you what I told my therapist. I said, one day, “I need a f**king wife.” She said, “Yes.” My therapist is in charge of maternal psychiatry at a prominent university, so this is a seriously expert opinion.

In a perfect world, the world that Weatherspoon is writing into existence, women wouldn’t have to feel like they’re compromising. We’re not destroying our careers, or our children, because we have someone we love and trust to help us—we can work well and we can parent well at the same time. In this world, the massive boulder of responsibility isn’t CONSTANTLY ROLLING DOWN THE MOUNTAIN TOWARD OUR FACES.

RAFE might be a romance novel—and it is hot, trust me—but it is also a teaching book. It taught me, and every woman who reads it—that we deserve way more than that boulder.

And it then, it did EVEN MORE than that: Sloan, a Black woman (yes, you capitalize these words, dammit), dates Rafe, a White man. Rafe’s own father married a Black woman years before and had more kids, so Rafe’s half-sisters are Black. He grew up in a predominantly POC neighborhood in L.A. He has his GED, and did time in juvie. Weatherspoon flipped the script here in a very important way. In literature, in advertisements, in movies, and in real life, when we see mixed-race couples, we see Black men with White women. There’s a whole lotta ugly misogynoir (google that word) behind these couples, behind THAT line in THAT Kanye song, but it comes down to how our society values White women’s bodies vs. Black women’s bodies, history that goes back, you know, centuries.

Basically, Weatherspoon takes on centuries of racism and misogyny likes it is NBD and tells a rip-roaring story to boot. She’s writing into existence a world in which a brilliant working Black woman gets the help she needs, the security she deserves, and the man she loves, in which they can talk about race without things getting weird, even though he’s White, and keep her Black daughters safe, even though they take no prisoners. I want to live in this world, thank you. 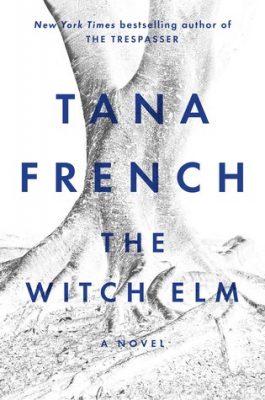 Before I wrote this review, I did a little research about what OTHER reviewers were saying about this book. Because I thought that maybe, just maybe, despite my decades of training in text exegesis, I might have got it wrong.

So I read the New York Times review written by Stephen King, whom I generally like, and his placid and bland review had a lot to say about nothing, giving the book a genteel thumbs up: “French’s intense interest in identity and self-deception might make this a slow-building book for some. But if you read her as carefully as you should, it’s a seductively detailed start in which every bit of dailiness is made to matter.”

Then I headed over to the Washington Post, where Maureen Corrigan PANNED the book, with this as a kicker:

I’d say that without any “bang, bang” for hundreds of pages, “The Witch Elm” becomes “boring, boring.”

I couldn’t believe that I could be so far off in my reading of this immense, unsettling, and completely REVELATORY book. It’s like French has pulled off not only a massive storytelling feat, but also a massive political one, and then what, half of the readers just MISSED IT?

So I changed my Google search terms just a little, and found Vox’s review. Finally. Constance Grady (@constancegrady) got it. I knew I couldn’t be the only one. You can read the review here. But here’s the dek, which gives you the basic gist: “When Tana French writes about crime, she’s writing about power. The Witch Elm shows why.”

Yes. Power. In the case of THE WITCH ELM, French is writing about gendered, heteronormative, racialized, able-bodied (normate) power.

Many years ago, I used to have an in-joke with a friend of mine about a cis, het, wealthy, normate white dude that we worked with. He was, really, I swear, a nice guy. He never told off-color jokes. He did good things. But he was completely, totally, ABSOLUTELY oblivious to the pain that systemic power caused to the individuals around him who were not like him. Like systemic power does, it allowed certain individuals to harm other individuals with no consequences. Systemic power allowed certain individuals to harm people like me, a disabled woman. People like my friend, a woman of color. Both of us were in far more precarious employment and financial positions than he was. He just didn’t get it. Worse, he didn’t know he didn’t get it. Even worse: he didn’t try to get it.

When I would explain to him how someone at work was cruel to me, personally, or how a structural problem affected me personally, hurting me, personally, his eyes would widen like a toddler who’d discovered poop on his hands. Eureka! And then he would say these words, precisely, every time: “Wow, I just never thought about it.” Like never thinking about it excused his ignorance.

To this day, “I just never thought about it” is how we talk about dudes like this guy. Not malicious. Not hateful. But a plague on society nonetheless.

Now take that sort of plague and make him the jovial narrator of a book, and you have Toby, the hero (?) of The Witch Elm. Man, Toby sure is likeable. He is an all right dude. Most people who read this book—most people including me—will not understand what is going on until about half-way through. And I’m not spoiling this book for you. I mean, if Stephen King and Maureen Corrigan didn’t get it AT ALL, I’m just helping you along here.

As you read, and Toby’s world gets flipped upside down, and you realize who the bad guy really is, and it isn’t who you think, not the murderer (when that’s revealed) but perhaps something larger, more sinister, and a heck of a lot harder to put into handcuffs. And that’s when you realize that French is maybe one of the most brilliant writers ever to write ever.

Tana French started with IN THE WOODS, a fantastic book with a shaky ending—maybe? She lit up the world with THE LIKENESS. Things just got better from there. I cannot praise her enough. THE TRESPASSER, the sixth Dublin Murder Squad book, CHANGED MY LIFE. Her books are dark and moody, and I love them. I hate having to wait so long between each of them, and I preorder as soon as I can. THE WITCH ELM is her seventh book, and at first it seemed like a massive departure. But when you look at her last three books in a row, you’ll see it’s not a departure at all. She’s just been busy changing the world with her mighty fucking pen.

If the theme of this book review post is writing a better world into existence, Tana French has written OUR WORLD into existence so that we can better fight it.

*Note about book reviews on this blog: These are just some of the books I’ve read this month, books that I selected and that I purchased. If someone gave me a review copy I will say it in the post. Of course, I read far more books than these each month, but I can only write so many reviews. I don’t take review submissions unless I know you, so please don’t email me to review your book. I just write book reviews for fun and to call attention to books that I think deserve some spotlight. And to change the world.