What Happened to Katie’s Head?

I’ve spent so many years of my adult life as a disability scholar and activist for disability rights—and frankly, as an activist for the understanding and humane treatment of people with disabilities. I have a psychiatric disability (or multiple ones, really), and being disabled is part of who I am and the work that I do.

But I’d grown accustomed to things. My medication works. Despite having anxiety disorder and bipolar disorder, I find my life is predictable to the point of being almost boring—and I like it that way. 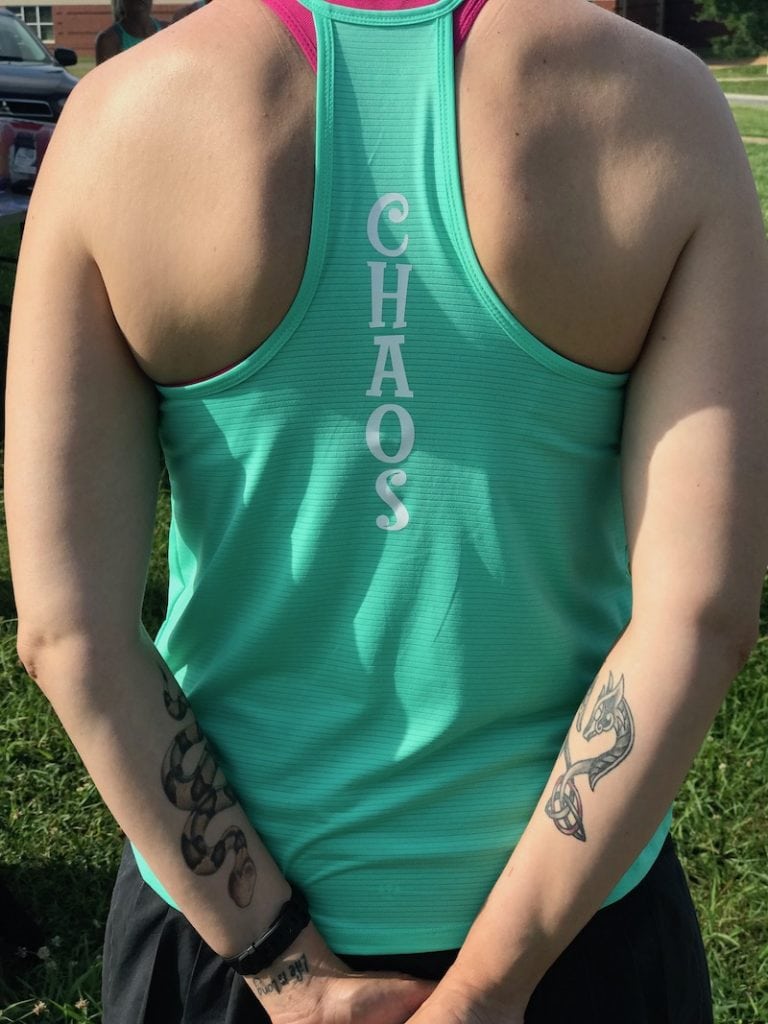 Alt Text: A photograph of me from the back at my tennis tournament in our team jersey, which reads “Chaos” down the back.

And then something happened. I played in a tennis tournament. A big one—the United States Tennis Association (USTA) North Carolina State Championships, in Lake Norman, NC. It was really, really hot. Until this tournament, and up until the final day, I always appreciated playing in the heat. I felt like it gave me an edge. When my opponents would start to flag, I would still be going strong. I could tolerate the heat. I could push through.

My doubles partner was the same. That’s one reason I love her. We played two matches a day on court surfaces that reached 120 degrees. Our fourth match, on day two, it was easily that hot. We went to three sets. We were not going to lose. We were undefeated. At the start of the third set, my partner pointed to the far corner of the court and said, “That’s where we’re going to vomit.” I said, “Fair.” She figured if we had a vomit plan, we’d be all right. (She’s also a runner. Runners are crazy.)

Day three, match five. 11am start. The hottest day yet, with the worst supplies—no water coolers on site, no shade. It was devastating. I was seeing spots and getting chills early in the second set. My reaction time was slow, and I could feel it. I kept apologizing to my partner. We rolled our opponents in the first set (when I was still with it), then they came back and won the second. In the third, we picked our vomit corner, and it came down to the wire. They won.

I was disappointed, but it was all right. 4-1 at the state championships isn’t bad if you think about it.

And then, shortly after the match, I collapsed. Heat stroke. Full bore. Delirium. In and out of consciousness. 911. Ambulance. Shaking chills. Trauma IVs. My doubles partner stayed with me the whole time, riding in the truck to the hospital.

Three liters of fluids, some blood tests, an Rx for nausea meds, and they let me go home. It’s a 2.5 hour drive back to Chapel Hill from where we were. We made it back, and I dropped on the bed at home. I figured I’d be better in a day or two. That was Saturday.

I was not better in a day or two. By Tuesday I was still suffering symptoms, and they were bad. Nausea, dizziness, sudden sleepiness. I made an appointment to go to my family doctor. My own doctor couldn’t fit me in for an acute appointment, so I saw the other doctor in the group.

Doctor No, as I’ll call her, did an okay job. But she screwed up in one major way. After examining me, she asked me this. “Could all of these symptoms be caused by your anxiety?”

Friends, this question is the equivalent of “Is this all in your head?” It’s the worst nightmare of a person with a psychiatric disability seeking medical treatment.

As a person with a psychiatric disability, I should be accustomed to questions like this. But I chose my doctor’s office because they are forward thinking and do not say dumb shit. This was my first time seeing Dr. No.

I told her, with as much dignity as I could, that no, these symptoms were not in my head, and I know what anxiety feels like, and this is not it.

I made an appointment with my regular doctor the next day. 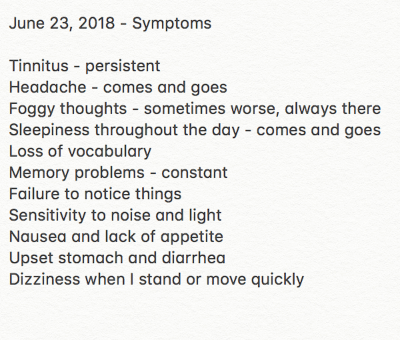 Alt text: A screenshot of my list of symptoms. It reads: Tinnitus – persistent; Headache – comes and goes; Foggy thoughts – sometimes worse, always there; Sleepiness throughout the day – comes and goes; Loss of vocabulary; Memory problems – constant; Failure to notice things; Sensitivity to noise and light; Nausea and lack of appetite; Upset stomach and diarrhea [sorry, TMI]; Dizziness when I stand or move quickly.

A side note: I haven’t been able to write about this for many reasons. One of the reasons is the treatment I received by Dr. No. The other reason, as I’ve told my friends privately, is that there are so few precious hours in the day when I’m functional at all.

Those hours are first thing in the morning. Usually first thing in the morning I have to get my kids to camp, and then I have to use that precious time to try to do a full day’s work before crashing and burning around lunch time. The rest of the day I can barely look at a screen. I can read some. Sometimes. I try to fake it on social media, and keep the rest of my work going. But it’s really, really hard to even stay awake. I can’t drive. I can’t do anything. I’ve never been so grateful for the casseroles my mom keeps bringing over.

When I saw my regular doctor, I told her what Dr. No said, and she was very sensitive and apologetic. Then my doctor told me to rest, banned me from my favorite hobby (tennis) and even walking the dog, and told me to come back in a few days to see if I’d improved.

You know what that list of symptoms looked like to me when I finally finished it, two days later? A concussion. I’ve had those before. In fact, that’s what what my doctor said when I saw her again. She asked if I was sure I didn’t hit my head. I was sure. 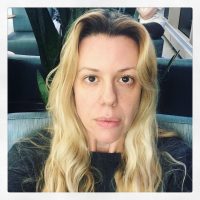 Alt Text: A photo of me waiting to have my MRI. It was at 6pm, so I can barely hold my eyes open.

So then I had a brain MRI. And today I got the results. They’re normal. So what does that mean? I’m glad I don’t have “anything serious” happening in my brain.

Now I’ve grown accustomed to the schedule, this new brain schedule to add to my old brain schedule. I wake up, feeling the most energy that I will feel throughout the day. I seize that energy, use it to do what I can. I eat lunch as soon as I start to feel the wave of exhaustion coming on. Otherwise I won’t eat, which makes things worse. When the exhaustion hits, I shut all the blinds and lie down. I sleep for at least 2 hours and that’s okay.

Then, when I wake in the afternoon, I’m not refreshed. I’m dizzy, and unfocused, and foggy for the rest of the day. Loud noises hurt, bright lights hurt. I can’t think of words. I can’t remember what happened five minutes ago. During this part of the day, I have to be very, very gentle with myself.

I’m running out of time for this overly long blog post. But I wanted to let you all know where I’ve been for two weeks. So the answer the question posed in the blog post title? I don’t know what happened to my head.

I don’t really need anything except patience. Someday, hopefully someday soon, I’ll be back to my normal routine. I had a panic attack last night and after it was over, I thought, That was kind of comforting in its familiarity.

Love to you all. -Katie Rose

*Please pardon the excess of typos. I’m not up to fixing them today.