:: Molten Dusk, and the rest of the series, gives readers a story about a girl accepting who she is meant to be, holding tight to her closest friendship in the toughest of times, and accepting love even though it terrifies her. 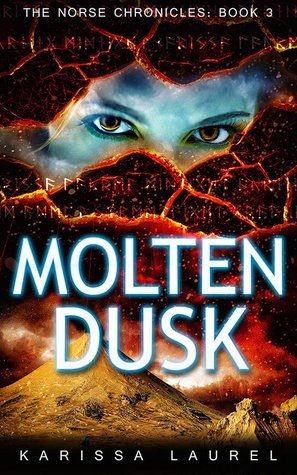 While recovering from a devastating betrayal, Solina becomes increasingly drawn to Thorin as he helps her hunt down Skoll, the mythical wolf who vowed to kill her. If she can find and destroy the beast, she’ll bring a swift and brutal end to her enemies’ schemes. But nothing ever goes as planned in Solina’s strange new world.

During her search for Skoll, Solina uncovers a plot to unleash a battalion of legendary soldiers and launch an apocalyptic war. Before she and her allies can locate the fabled army, several ghosts from her past return to haunt her. Solina must fight for life and the fate of the world, or her hopes for love and a peaceful future will go up in flames.

I’ve been reading this series since the first book first came out, watching the heroine Solina grow from a naive girl grieving the death of her brother to the determined, brave warrior she becomes in Molten Dusk, ready to claim her destiny.

This series is set against a backdrop of Norse mythology and a battle for the fate of the world, but what makes it special is not the supernatural element (although its supernatural element is refreshingly new in YA/supernatural fiction). Rather, the best part of this trilogy, and of this final book in particular, is that you get, in the end, a story about a girl accepting who she is meant to be, holding tight to her closest friendship in the toughest of times, and accepting love even though it terrifies her.

In other words, you get a story with universal, human appeal.