The Invisible Adjunct Hero at Kentucky

:: Overworking your contingent faculty is nothing to brag about, Kentucky.

A story recently broke about stolen exams at the University of Kentucky, how a student crawled through an air duct to steal a statistics final in order to cheat. He let another student into the building, and then they were busted by the professor when he returned to his office and found them there.

A few things about the story—the version I read in The New York Times—struck me as odd. The professor was never referred to as “professor,” but rather as “instructor”—and the Times was very, very careful to never say “professor.” The late hours struck me as well. I figured the class was a large, introductory one, where someone might bother to steal an exam. That’s not the sort of thing you do for a seminar. Indeed, this seems to be the course:

Someone attuned to higher education would come to the conclusion I did, and it only took a quick search to confirm: of course the “instructor” was a contingent faculty member. Of course he was.

This is what we contingent faculty do. We work too much, at wacky hours, often in shared offices, teaching introductory classes over and over again, with schedules or locations “TBD.”

Hell, we ARE the TBD.

Our heroic instructor is indeed scheduled to teach this summer, and again this fall. Good for him. At least he has a modicum of job security. Even if he does have to teach the exact same course over and over again in a cycle underpaid, mind-numbing work that Sisyphus would run from. (Well, maybe not Sisyphus, but I did.)

Maybe he even has a full-time position. Maybe? Fingers crossed. (Dude, if you’re reading this, I’m rooting for you.) However, it doesn’t look like he has his own office, from this list of Stats instructors that I found: 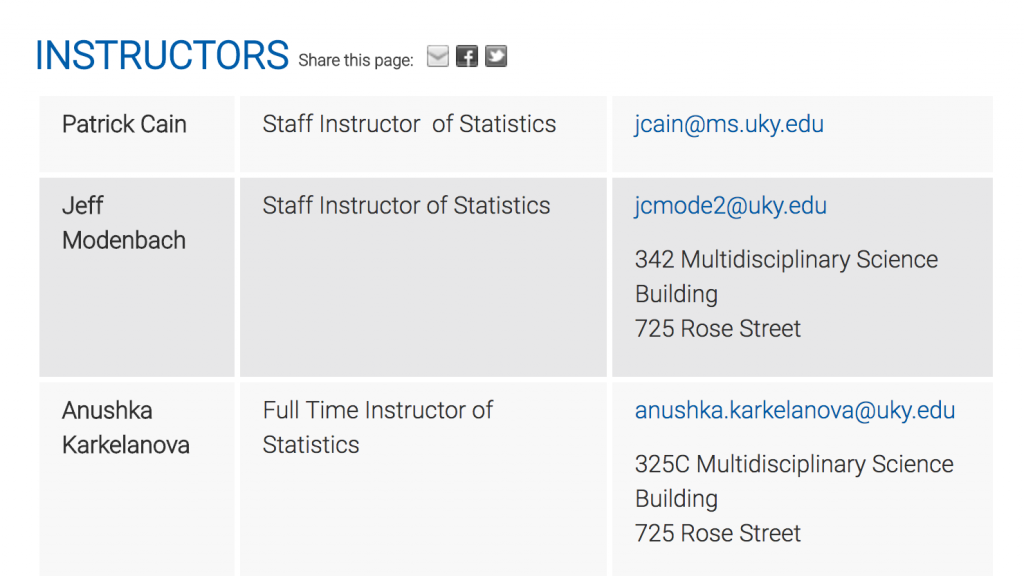 Or if he does have his own office, no one has bothered to update the website with his information, which is completely normal when you are contingent. I was once told that because I was contingent, my name didn’t need to be in the faculty directory. You know, because I was likely to be gone next year. (Thanks, y’all. That felt awesome. I will literally never forget it.)

But I haven’t gotten to the best part of the story yet. The capstone. The part where I went bananas and my husband had to call up to ask if I was okay. Where I had to scream at the absolute nerve of University of Kentucky spokesman Jay Blanton who had this to say about his overworked, underpaid academic laborer:

The text reads: “It’s an unusual set of circumstances,” he said. “It also underscores how late our faculty work.”

There’s nothing to be proud of here. Don’t brag about overworking and burning out your contingent faculty in the New York Times.