How To Write A Holiday Love Story

:: When my publisher told me they wanted me to write a love story set around the winter holidays, and “Oh, it needs a happy ending”—I felt like I was standing barefoot and under-supplied at the bottom of a very tall, very rocky mountain that I had to climb if I ever wanted to eat cheese again.

A happy, holiday love story? Did they even know me? Sure, my books have love stories in them, but that was because they have humans in them. But my writing isn’t bright and happy. My books tend to be on the darker, more thrilling side. After all, I write about Hollywood.

And then I was struck by the sweetest flash of inspiration this side of a Jane Austen retelling. I was going to write about my mom. Her love story was the best. After all, she got to have two of them.

Her first husband was not my father. With her first husband, my mom, Barbara, had a fairytale wedding to a United States Air Force Academy graduate named Bob. (He was class of 1969, one year ahead of Coach Gregg Popovich.) But only two years after they married, Bob was killed in action, shot down in Laos in his Forward Air Controller (FAC) plane. During his short career, he’d received not only a Purple Heart, but two—two—Distinguished Flying Crosses.

Barbara was a widow in her early twenties. She had to start all over again. It was the early 1970s, and there weren’t many choices for a woman on her own. She had a college degree, though, and decided to go to graduate school. She met my father, who was a medical student at the same hospital where she was working on her master’s of public health.

And here I am.

But the story of how my father, Chris, convinced Barbara to marry him—to even go out with him in the first place—has become such a deep part of my family lore that I knew I could turn their myth into my novella. I could write my mother’s tragedy and her second love story. Coincidentally, that second love story happened at Christmas.

But, I wasn’t going to tell my parents about my plan. I figured I’d write it, and then they’d love it, right? Who wouldn’t want all their personal business published internationally for the world to read, even if it is (mostly, okay, partially) fictionalized?

My husband: “You’re using their real names? Has your brain fallen out of your head?”

Me: “I don’t understand what you’re getting so worked up about.”

I was, as you can imagine, terrified.

We were visiting for the holiday, and I pulled my father aside. I told him about the novella.

One parent down. On the spot, I concocted a plan to handle telling my mom. I’d have my dad do it for me.

“I’m going to take my kids up to get ice cream, and you give her the book,” I said to my dad. “You call me when she’s done reading it, or like, when you can tell it’s safe to come home. Whichever comes first.”

Look. I’m the older daughter, so I get why “Big Girl” was my nickname. But he still calls me Big Girl even though I’m forty and have kids and a house with furniture in it.

We went to the ice cream shop, where my sons (who are twenty-two months apart, and no it’s not “better” if you “get the having kids thing over faster”) covered themselves in dairy products. After an hour, I called my dad’s mobile phone.

“She’s still in the bedroom.”

“She’s still reading?” My mom reads wicked fast. She should have been done, or at least close to done.

“Does she look mad?”

“Don’t think so. She looks kind of serious.”

Serious. That could go either way. “Call me if she starts to look mad.”

After hosing down my kids in the bathroom of the ice cream shop, I took them to the outdoor goods store to try on shoes. This store is always a good choice for shoe shopping because my kids get to run laps around the building to test the product and also disprove at least two laws of thermodynamics.

After an hour of laps, I phoned my dad. “Is she done yet?”

“Does she look mad?”

“We’ve been gone for two hours.”

“Dad.” I smacked my forehead with my cell phone. “Ask her what is going on.”

He told me to hold on. I heard muffled mumbles, and then my dad came back on the phone. “Well, here’s what happening. She said she had to read it a third time. That’s what’s taking so long.”

I bought the kids’ shoes, and even the super-chilled-out part-time yoga instructor salesperson looked happy to see us go. I threw the kids in the car and sped back to my parents’ home.

When I arrived, I handed my kids to my dad with strict orders to keep it together, please, and made my way down the hallway as quietly as I could. 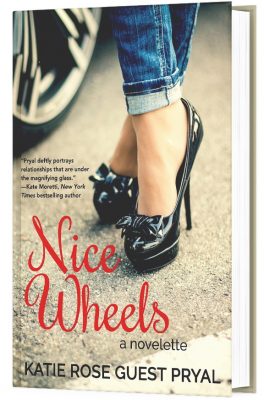 I slowly opened the door to my parents’ bedroom. All the lights were off except for the lamp by my mom’s side of the bed, and the late afternoon sunlight cast shadows. I sat on the edge of the bed.

“How did you know all of this?” my mom asked me, holding the book in her hands. By the lamplight, I could see she’d been crying. But she wasn’t sad. On the contrary. She looked like she’d been given a gift.

My heart opened up.

“You’ve been telling me these stories my whole life,” I said. “I’ve just been listening.”

Learn more about the novella, Nice Wheels, which you can get here for free.