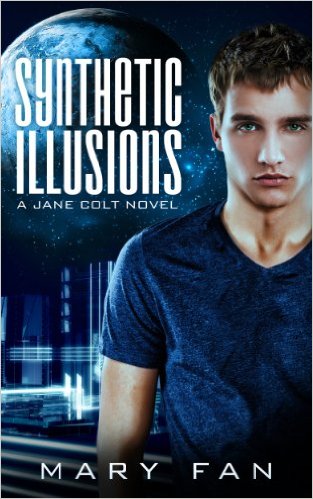 Synthetic Illusions opens in the consciousness of the human-like AI Adam Palmer, who is also the heroine Jane Colt’s boyfriend. (Adam is one of the main characters in the first book of the Jane Colt Trilogy, Artificial Absolutes.) In his dream, he commits a violent act and confronts Pandora, the chief architect AI (think Skynet) who created him and other AIs. The problem is, Adam and Jane destroyed Pandora months ago. She’s dead. But she did leave behind other AIs who, like Adam, remain hidden among the population of the galaxy.

The problem is, when Adam wakes from his dream, he realizes that his dream is reflected in real events. The news tells him that another AI, like a sleeper agent, committed a terrorist act. Worse, the remnants of Pandora is using Adam to control other AIs.

Meanwhile, Jane Colt has stood by Adam and her love for him—which he returns—and insists that their relationship can survive the challenges they face. But the challenges are about to get a whole lot harder. Because the recent violence committed by AIs have brought the AIs out into the open, and ISARK (the equivalent of the CIA) knows about Adam. To make matters worse, Jane’s older brother Devin, an ISARK agent, has been tasked with bringing Adam in.

But things are much more complicated than they seem. And, as usual, Jane will do anything to protect the people she loves. When she realizes her own brother has betrayed her to ISARK, she uses what she learned when they were on the run from Pandora to stay ahead of ISARK and Devin. The adventure begins.

Mary Fan has built a gorgeous, elaborate universe. The ships are complex and beautiful—just wait till you see what a Silverside can do. The central star systems, the fringe star systems, the star systems controlled by mercenaries—so many fascinating places to visit, and we get to see them all.

I have only one complaint about this book. It’s a small complaint, and I’ll temper it even more in a moment. Here goes:

Jane is pure of heart. She’s a fighter. She dashes headlong into trouble, but she does it with the best intentions. We want to love Jane.

But her big brother Devin, who is often a bossy jerk, ends up being easier to root for—because he has the style, the power, and the secrets—while Jane is kept in the dark for so much of the story. We, as readers, also know these secrets, because we’ve been sharing Devin’s point of view. We might think Jane should have figured things out by now. But really, that’s unfair to Jane.

By the end of the book—and this is not a spoiler—Devin and Jane work things out and team up. When Devin sends Jane after the bad guy on her own, he says, “Give him hell, Pony,” using her childhood nickname. And yeah, I cheered.

More of that. Sooner. Devin and Jane are so great together. That’s what drives this series and what makes it special: The brother-sister relationship, their love for one another, their sacrifices, their trust, their everything.

I read a lot of SF/Fantasy, and I can’t think of a better brother-sister team than the Colts.

Another great thing about this book is the cast of secondary characters. My favorite is a mercenary assassin who made a brief appearance in the last book and is more prominent here. Although this book definitely stands alone, there are hints at the end of the book that this merc plays a big role in the third book. She’s so dang entrancing that, for her alone, I would read the next one.