:: Those interested on a fresh take on immortality stories: you will enjoy this book. 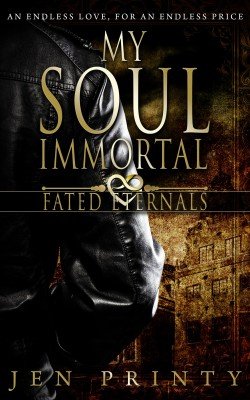 My Soul Immortal opens with our hero, Jack, staring at the barrel of a gun. He stopped in a liquor store late at night to pick up a six-pack of beer. Unlike everyone else in the store, though, Jack has refused to back down from the armed robber. In fact, Jack is more concerned with losing the six-pack of his favorite beer—the last in the store—than with losing his life. (The book is told from Jack’s first-person point of view.) That’s our first clue that something isn’t quite normal about Jack.

After getting shot, Jack takes down the would-be robber and ties him up. Then, Jack bolts to his crappy L.A. apartment. He’s got to pack and leave town, stat. As his body heals his bullet wounds, he loads his few belongings on his motorcycle and heads to a new town picked at random: Portland, Maine.

Readers of books about long-lived immortals, whatever the nature of their longevity, are accustomed to certain common features of these immortals’ lives. One common feature is that they’re wealthy. After all, wealth accrues over time. Plus, if you are eternally young and healthy, you don’t have to worry much about medical bills. However, in Jack’s own words, his apartment in L.A. is a “hellhole”—although we quickly learn that he’s 170 years old. The state of Jack’s financial affairs raised my first question with the story: Why, after 170 years, does he choose to live in a hellhole? (I would definitely have bought in to lower Manhattan, you know?)

Jack’s explanation to the reader is that he has a death wish: “I’ve always been more concerned with obtaining a place in the hereafter than any monetary gain.” And the reason for his death wish? The love of his life, Lydia, died of influenza 150 years ago, and Jack’s never gotten over losing her. All he wants to do is join her in death. But he can’t, and he’s super annoyed about this.

He arrives in Portland, and quickly lands a job at a used book store. Crossing the street shortly after his arrival, he bumps into a woman in a raincoat. And it’s her, his Lydia, except her name is not Lydia, it’s Leah. Worse, she has no idea who he is. But does she? What is going on? How is Lydia-not-Lydia alive again? Will she have dinner with him?

And why does Jack feel the urge to kill people all the time? And who is this guy with the blue eyes who keeps showing up when people turn up dead, and why does he seem to know more about Jack than Jack knows about Jack?

My Soul Immortal, through the beginning and middle, moved slowly: Jack works at bookstore. Jack tries to get the courage to talk to Leah. Jack doesn’t know what he is but wants to. Jack can’t decide if he wants to die. Jack can’t decide if he should go to the movies with Leah. There just isn’t enough tension for the book to fulfill its promise. Part of the problem is that Leah’s character is a boring bit of fluff. She’s protected by all of the men in her life, and has little-to-no ability to act on her own.

But in the final third of the book, the pace kicks up. Hidden features of the plot are revealed, and although Leah remains fluff—indeed, she’s completely out of the action during Jack’s final adventure—I wanted to keep reading to find out what happened. Also, the book is based on fresh mythology for urban fantasies—no vampires here—and that mythology is solid and held up well during the storytelling. Indeed, I wish we’d learned more about the mythology sooner in the book.

Those interested on a fresh take on immortality stories: you will enjoy this book.

(The book ends on a bit of a cliffhanger, setting up the author’s “Fated Eternals” series.)