:: Soon, all of them are on the run from some seriously bad people, and no one can protect the heroine but herself. 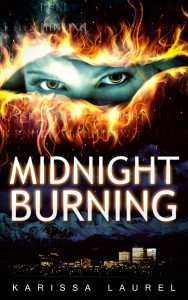 Purchase Book: .99 eBook, 15.99 Paper (Not sure if that eBook price is a temporary discount, though)

Solina Mundy, when we first meet her, is flying to Alaska from her home in North Carolina to gather her dead twin brother’s belongings. Her brother Mani, murdered under mysterious circumstances four months before, left behind an apartment, his things, and friends who cared for him. Solina told her parents she only planned to stay a week to do her duty by her brother. But soon, suspicious events send her on a different path. She wants to solve her brother’s murder.

She wants to solve his murder because the night that he was killed, Solina had a vision: she watched him die in her dreams. In her vision, Mani was killed by a giant wolf. And now the vision won’t leave her be.

Solina quickly befriends Mani’s friends. Before he died, Mani worked as an adventure guide in Siqiniq, Alaska. Val, Mani’s best friend, became close to Solina during the months since Mani’s death. Val seems determined not only to befriend Solina while she’s in Alaska, but to woo her as well. There’s Skyla Ramirez, who turns out to be Mani’s girlfriend. Then there’s Val, Skyla, and Mani’s oddly stand-offish boss, Mr. Thorin, owner of Thorin Adventure Outfitters.

The first night Solina is in town, Mr. Thorin wastes no time in telling her that her presence in Siqiniq will only stir up trouble. He wants her gone.

Skyla, though, has other plans. She joins Solina in her quest to solve Mani’s murder. And the closer the two women get to the truth of his killing, the more danger Solina finds herself in. Soon, all of them are on the run from some seriously bad people, and no one can protect Solina but herself.

While I was reading this book, I was expecting a—surprise!—werewolf story. I was wrong. This book is way more fun than that. Skyla is a blast. Solina’s journey of self-discovery is also fun. Thorin and Val, once their true relationship is revealed, are hilarious.

Heads up: Although this story ends in a loosely-tied-together fashion, it is definitely the beginning of a series. And since this book was just published in July 2015, you’ll have to wait a while for the next one. If the alacrity with which I clicked into the Kindle store looking to buy the next book in the series after finishing this book is any indication of my enjoyment of the book, then yes, I enjoyed this book. That alacrity, combined with my grave disappointment that I HAVE TO WAIT SO LONG FOR THE NEXT ONE, leads us to the following: