:: Sacrificial Lamb Cake is witty, with a heroine, Rain, who is smart and easy to believe in. 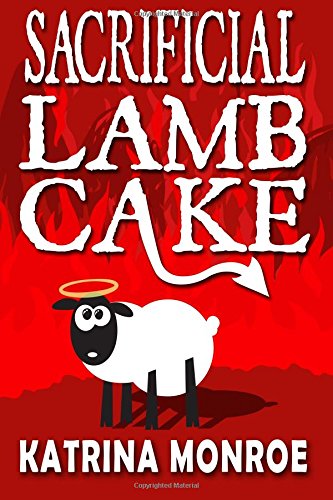 Rain Johnson (real name Rainfall on the Desert Plains Johnson—her parents were eco-hippie-anti-establishment zealots, and she doesn’t hang out with them much these days) is a waitress in Minneapolis. An artist by trade and love, she lives with her best friend from art school, Francine, and they work at the same restaurant to pay the bills. They also occasionally sleep together, but Francine is a free spirit who has no interest in adding more than some side benefits to their friendship.

Rain works hard to accept this. Some days it’s harder than others.

It’s a regular day when they head into work for the dinner shift. But that night, Rain is accosted by a strange, overly pale man in a dark suit. He grabs her wrist when she tries to blow him off, spouting some nonsense about Jesus, and her boss forces him to leave. Later, when Rain finishes her shift, he comes up to her car in the dark parking lot. She’s terrified. But all he does is tuck a dark envelope sealed with wax under her windshield wiper, then disappears.

At home in their apartment, Rain and Francine open the envelope. They find a thousand dollars cash and an invitation to meet the man for coffee the following day. They speculate about the mystery man, but one thing’s for sure. Something’s off.

They’re not wrong. The man, who signed the invitation “Jude,” is Judas Iscariot, sent to Earth by God because, frankly, Judas owes God a favor. God believes the people of Earth have gotten His message wrong, and He needs a new messenger. The new messenger is nothing as dire as the second coming—which would bring on the apocalypse—but rather a person who is clearly speaking for God about what it means to be a good person and to live by his ideals. A person like Rain: a lesbian artist working as a waitress who is covered in tattoos. (I mean, she does sound like my kind of girl.)

But Jude and Rain don’t have it easy getting the message out. Almost immediately, they’re betrayed by all of the people a person should be able to trust. And that apocalypse thing? It turns out there are some people who wouldn’t mind seeing it come after all, and they’re lead by a super-scary chick named Lucy with whom Judas had some dealings about 2000 years ago.

Sacrificial Lamb Cake is witty, with a heroine, Rain, who is smart and easy to believe in. For those who don’t know much about or who don’t care much about Christian theology, you might have a hard time getting engaged with the story line. But don’t worry, the book certainly isn’t preachy—it treats the myth like a myth, and you get to listen to a room full of Disciples swear at each other.