Pretending I’m Not a Woman, on Betrayals Large and Small 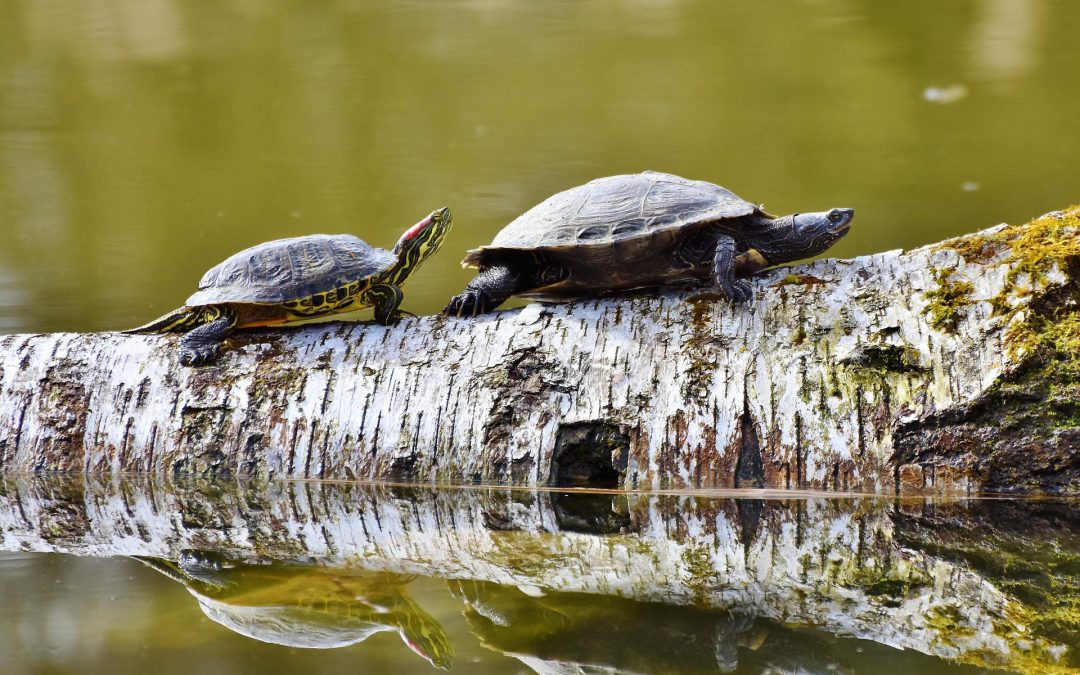 :: I can laugh about it now, but I have never forgotten how it felt to have sent an email with the intent to make the world a better place, to have received praise in private, and then to have been humiliated in public.

When others betray you, it sucks. Forgive and remember, my dad always told me. His words, so funny and dark and spot on.

But what do you do when you betray yourself?

I have a story to tell about how the editors of the Believer magazine betrayed me, in a small way, back in 2004. The magazine was young, and this was 18 (18!!) years ago, and so perhaps don’t hold this against them.

Instead, let’s learn from their mistake. File this story under that old adage that I believe came from Vince Lombardi, “Praise in public, criticize in private.” We can add to that adage the “don’t punch down” rule we’ve heard a lot about lately but is still, nevertheless, true.

I was in my mid-20s, a doctoral student, in a bookstore with my then-boyfriend. He showed me this cool magazine, his new favorite, the Believer. It was, indeed, cool. We were nerds, desperately trying to seem smart, and the magazine was smart and, more importantly, it made us feel smart. We both already had master’s degrees in creative writing, earned before starting our Ph.D.s in English, and we were both thinking the same thing: I’d love to write for this magazine.

I read the magazine, and was impressed, but in the end, disappointed. I pointed out that women just were not there in his new favorite magazine, and I felt left out. He thought I was overreacting. That made me angry.

Remember: he was a humanities graduate student dude in his 20s, a specific breed if you know it, and things like “sexism” and (whew) “institutional sexism” just weren’t interesting to him. (Sorry man, you know it’s true. You grew up! You’re way interested now!)

Stepping into the present, in order to read the Believer magazine I held in 2004, I had to do the thing where I Pretend I’m Not a Woman. I Pretend I’m Not a Woman when I watch The Godfather, or Scarface, or Ocean’s Eleven, or The Magnificent Seven (Japanese, old, or new version). These days, I rarely watch movies with what I call “Dudes Duding” (see, e.g. Dunkirk) because I just don’t feel like Pretending I’m Not a Woman anymore. Same goes for so much popular music ever made, like everything by The Eagles, who just couldn’t imagine an actual alive woman with thoughts. (Bruce Springsteen, on the other hand—his female characters were people to be admired. Love that guy.)

Pretending I’m Not a Woman in order to enjoy film, TV, music, or writing is something I was willing to do in my 20s because I thought I had to. But sometimes I would get angry, and I would rebel, and I would say something about it.

I said something to the Believer.

Here’s the letter I wrote: 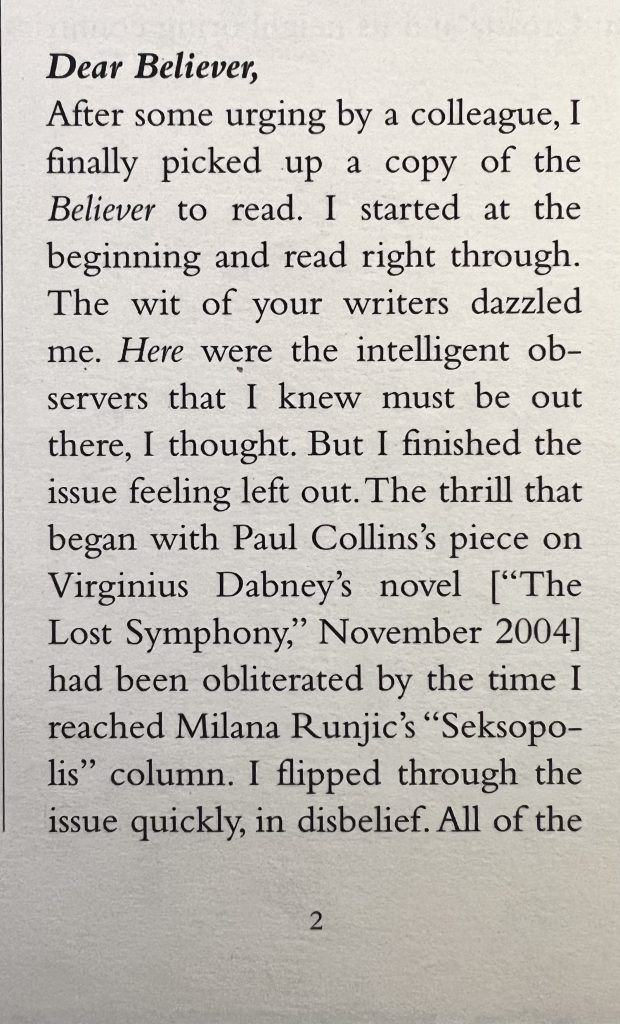 Here’s the text of the letter:

After some urging by a colleague, I finally picked up a copy of the Believer to read. I started at the beginning and read right through. The wit of your writers dazzled me. Here were the intelligent observers I knew must be out there, I thought. But I finished the issue feeling left out. The thrill that began with Paul Collins’s piece on Virginia’s Dabney’s novel [“The Lost Symphony,” November 2004] had been obliterated by the time I reached Milana Runjic’s “Seksopolis” column. I flipped through the issue quickly, in disbelief.

All of the feature pieces were written by men. All of them were about men as well, except one, which profiled a female baker. Of course, I did notice that the sex column and some short reviews were written by women. To be certain that I had not picked up an anomalous issue, I checked the previews for the next issue. Two articles were listed, both by men, about men. 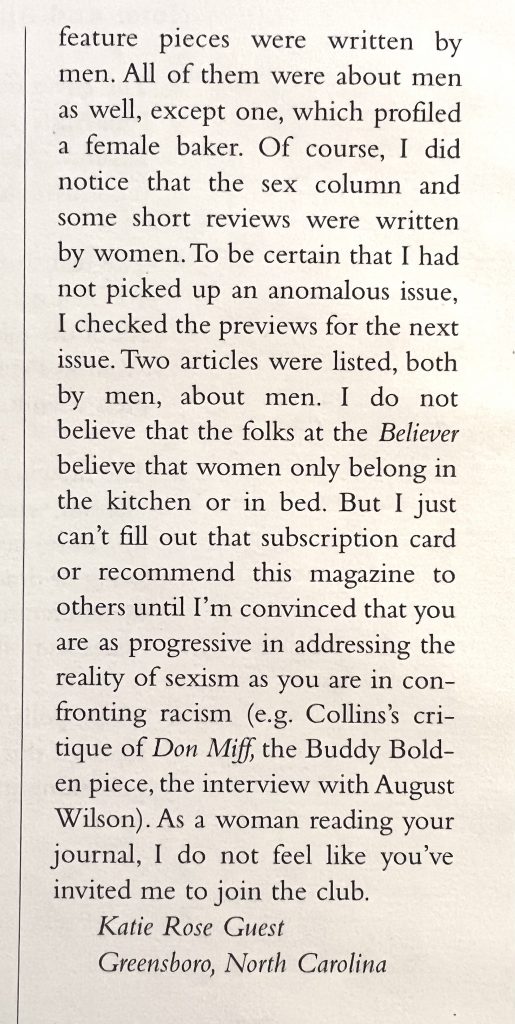 I do not believe that the folks at the Believer believe that women only belong in the kitchen or in bed. But I just can’t fill out that subscription card or recommend this magazine to others until I’m convinced that you are as progressive in addressing the reality of sexism as you are in confront racism (e.g., Collins’s critique of Don Miff, the Buddy Bolden piece, the interview with August Wilson). As a woman reading your journal, I do not feel like you’ve invited me to join the club.

This letter is far from perfect. I can quickly point out that comparing sexism to racism is always a bad move, and I did it here, and it wasn’t necessary to make my point. Also, I should have said, directly, that writing about sex is a good thing, but I didn’t, even though it would have made my argument stronger.

The magazine was nearly empty of women. It just was. I was upset, and this is the letter I wrote. I’m pretty impressed by its tone, considering how mad I was, and how much I wanted to use a flamethrower, but didn’t. I should mention that by this point in my life I had also attended law school, so I knew exactly what it meant to put something in writing, and I knew that flamethrowers should be used sparingly when composing email.

After I sent the email, an amazing thing happened—the (male) editor quickly replied! And he was cool about what I wrote! Wow! I was over the MOON.

Because, the thing is, in your twenties, you think you have all of this power, but you don’t.

You still have to do things like go see the movie Closer with your boyfriend and Pretend You Aren’t a Woman so that you can sit through it, and while you are watching it you have to pretend to believe that the two female characters in that movie actually have agency when they do not. You have to pretend to believe that when Julia Roberts’s character says, “He tastes like you but sweeter,” she was actually delivering a zinger when the line was, actually, merely a confirmation that Roberts’s character was the “f*ked-up slag” her husband calls her. (Dude, you remember me sobbing in the car after that movie? Okay, now you know.)

So when I got the reply from the editor of the Believer I thought, wow, I might have actually made a difference in the world, despite being a powerless 20-something and also a woman.

(Back then, I would never have said that I was powerless. Back then, I had the cockiness of youth. But looking back, I know what I felt, even if I didn’t acknowledge it, or have the words I do now.)

Here’s the reply I received from the male editor. 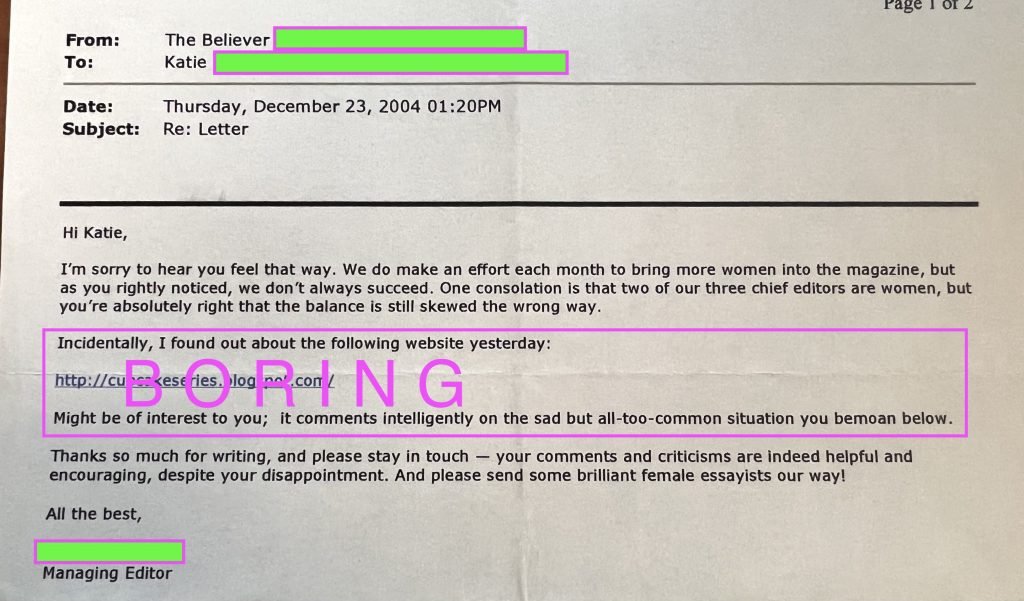 Here’s what it says:

I’m sorry to hear you feel that way. We do make an effort each month to bring more women into the magazine, but as you rightly noticed, we don’t always succeed. One consolation is that two of our three chief editors are women, but you’re absolutely right that the balance is still skewed the wrong way.

[Paragraph redacted with the word BORING typed by me, because it’s irrelevant.]

Thanks so much for writing, and please stay in touch—your comments and criticisms are indeed helpful and encouraging, despite your disappointment. And please send some brilliant female essayists our way!

At the time, I thought this letter was awesome! Especially this one clause was awesome:

“you’re absolutely right that the balance is still skewed the wrong way.”

He said I was right.

The last paragraph wasn’t bad, either.

This admission of wrongdoing, of balanced skewed, went a LONG way to making things better for me as a woman reader of this magazine. I overlooked the “we can’t be sexist because we have lady editors” line. I overlooked the “YOU find us female essayists” line. All of that was washed away by this man simply saying that they weren’t doing great and could do better.

But then things went sideways.

My letter was published, along with three other letters to the editors. But with my letter, and only my letter, they published a “response.” And the response was awful. Here: 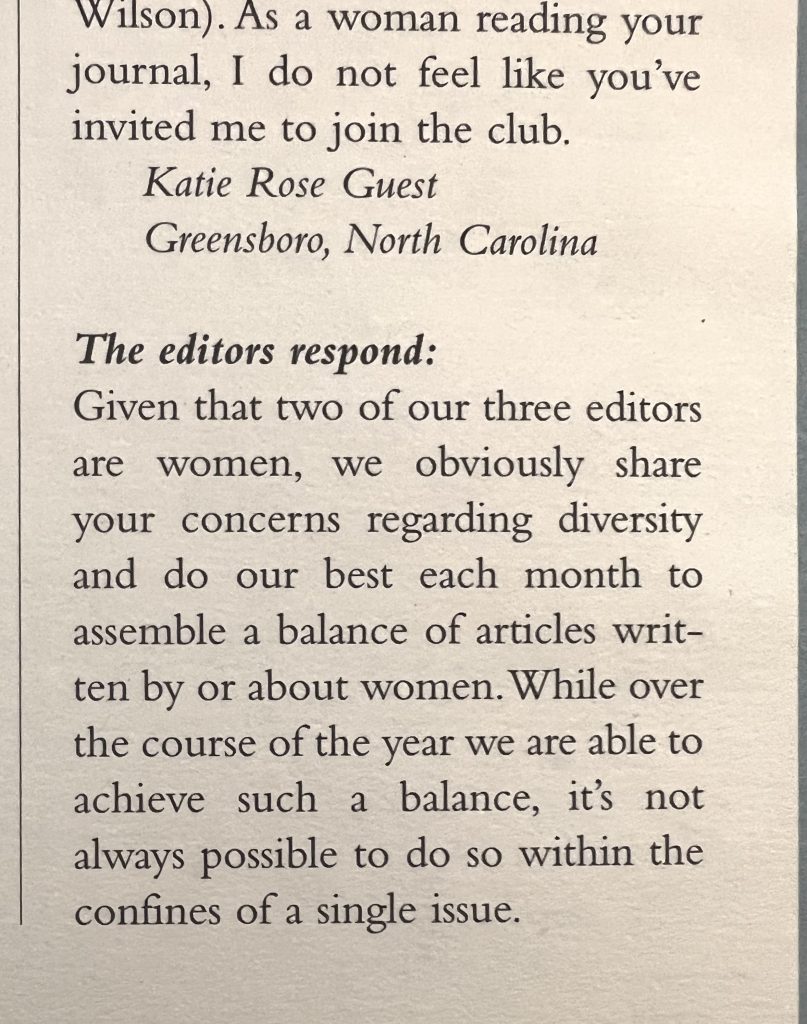 Given that two of our three editors are women, we obviously share your concerns regarding diversity and do our best each month to assemble a balance of articles written by or about women. While over the course of the year we are able to achieve such a balance, it’s not always possible to do so within the confines of a single issue.

The editors published my letter not to say, “Here is a valid critique, and we will take it to heart,” but rather to crush the critique with the “we have women, therefore we can’t be sexist” fallacy. They tried to turn my letter into a straw man, and, at the time, I thought they had succeeded.

The publication of my letter along with this response was a betrayal of the kindness of the email reply I’d received. It was also a public smackdown of an earnestly sent letter.

And it was just so stupid. Come on, people. You are the editors of the Believer, a bastion of intellectualism. Can’t you do better than a rhetorical fallacy and an easily disprovable falsehood? (The archives are online. Go look.)

I can laugh about it now, but I have never forgotten how it felt to have sent an email with the intent to make the world a better place, to have received praise in private, and then to have been humiliated in public. Eighteen years is a long time for those emotions to remain in my heart. I found these letters when I was cleaning my office recently, and they welled up anew.

More importantly, that day I started to learn—just started, but it was enough—what it meant when I Pretended I Wasn’t a Woman. I learned how it felt to put on that armor, and how it hurt me, actually, rather than protected me, and how, perhaps, when I wore that armor, I was betraying myself and I should stop that.

And so I have.

If you enjoyed this essay, you will enjoy my IPPY-gold-medal-winning EVEN IF YOU’RE BROKEN: Essays on Sexual Assault and #MeToo.

Buying my books is a great way to support the online writing that I do for free.