Why It Stings, or Disability and Oscars 2015 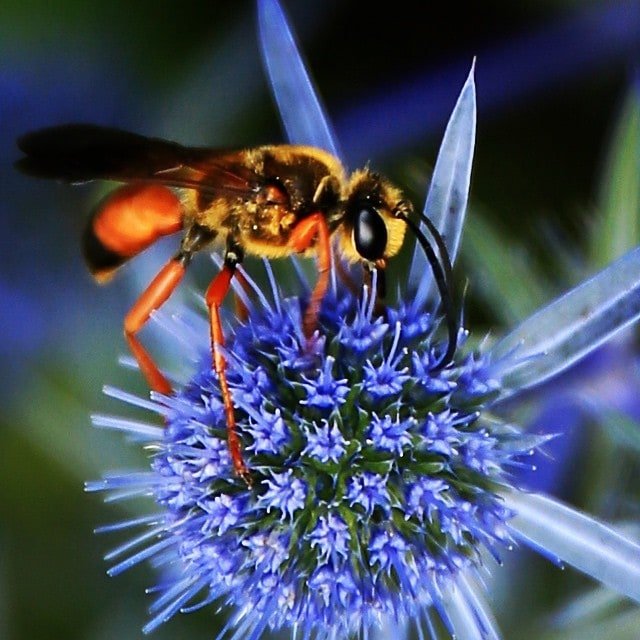 Image: Close-up photograph of a wasp on a blue flower. Image via Laura Collins Britton, lcbritton.com.

I didn’t watch the Oscars for a variety of reasons. First, there was the complete White-Out of the awards nominations, which is just gross, especially in a year with SELMA.

Neither of these actors are people with disabilities similar to the ones they are portraying. Of course they aren’t.

Here’s my off-the-top list of Oscar winners that traded on performance of disability:

The list goes on and on. And I’m sure there are many more that were nominated that didn’t win.

No. It’s not that simple.

Like most things, there’s more than one way to do a thing. Most films that trade on disability to garner Oscar nods are doing just that: trading on disability. These films trade on the disabilities of real people to make money and gain prestige while actually excluding people who live with disabilities from that world of money and prestige.

Part of the problem is this: How many in Hollywood can talk about their psychiatric disabilities without fear of repercussions? Because Hollywood is a world where it’s A-OK for top Sony brass and producers to write these words to each other about someone as powerful as Angelina Jolie:

A further leaked email thread between Sony Pictures co-chairperson Amy Pascal and movie producer Scott Rudin reveals Rudin once again harshly criticising Angelina Jolie. In the exchange, published by Gawker, Rudin describes the actress as “seriously out of her mind” as tension mounts over Jolie’s planned film Cleopatra, for which Eric Roth produced a script.

Who in Hollywood is actually going to come forward and give these assholes actual ammo to criticize their mental health?

I know I wouldn’t.

So here we are, in a world where studios race to put out the latest freakshow of a film to win Oscars, but call actors “crazy” behind their backs, shaming them—and all of us—into silence.

CAVEATS: Bravo to Breaking Bad for recently breaking this trend with RJ Mitte, a brilliant actor playing a brilliant role on a brilliant, if brutal, show. Also bravo to Michael J. Fox who is breaking every trend kind of constantly. I LOVE THE GOOD WIFE basically all the time anyway so go watch it.

If you enjoyed this piece, you will enjoy my book, LIFE OF THE MIND INTERRUPTED: ESSAYS ON MENTAL HEALTH AND DISABILITY IN HIGHER EDUCATION, available at lifeofthemindinterrupted.com and wherever books are sold. Buying my books is a great way to support the online writing that I do for free.